How to get to Jump Ljubno

Ljubno - a town that lives with ski jumps

Ljubno is a town in the upper valley of the Savinja river and is a good hour’s drive away from both Ljubljana and Maribor. The town straddles the gate to the wonderful Logarska dolina valley and has lived with ski jumping for more than eighty years.

First attempts at ski jumping took place here before the World War II. Jaka Vodušek put on his military skis to perform experimental attempts that could be referred to as ski jumping. A lot has happened between then and now, and today SSK Ljubno even has its own representative in the men's World Cup competition - Primož Pikl. In 1947, a contract to build a 60-meter ski jump was signed with the legendary ski-jump hill engineer Stanko Bloudek from Planica. Since then, the ski jumps were constantly upgraded and improved.

At the beginning of this millennium, the ski jumps were fitted with plastic grass and lighting, which makes Ljubno one of the best places to train and compete in Slovenia. The largest ski jump, which allows for jumps of more than 100 meters, is designed in accordance with FIS rules, so it’s no surprise that in February, the hill will host the best women ski jumpers in the world. 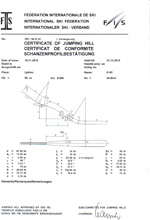 How to get to Jump Ljubno